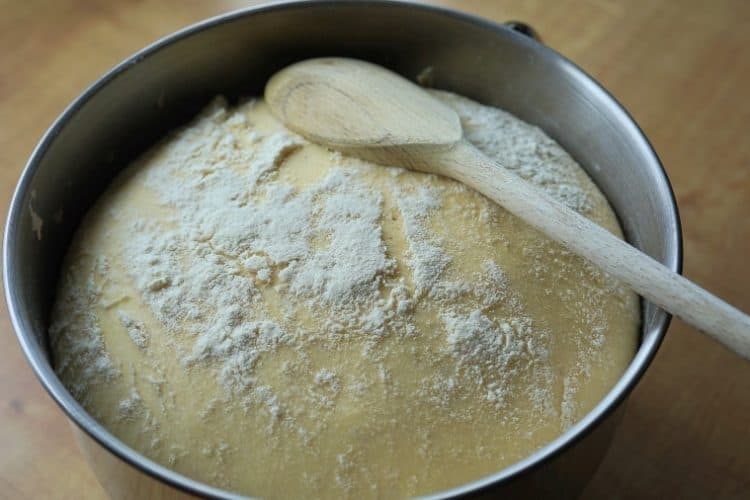 Having dough sitting in your kitchen or at the back of your fridge for too long might have made you wonder whether that dough has actually gone bad.

It’s fairly easy to forget about your dough. I’ve done it plenty of times and I’m sure that I’ll do it again, but I rarely throw it out.

If I’ve left dough at the back of my fridge for a week or so I’ll still use it for something and I rarely notice any kind of negative difference.

Dough does go bad, but it can take a while. If stored in the refrigerator, a standard dough seems to last 5-10 days before it starts to develop excessive bacteria. Dough containing milk-based ingredients or eggs can go bad much faster, especially if stored at room temperature for longer than a few hours.

By the time the dough is a week old, the yeast will have most likely exhausted all of its resources and it won’t be able to rise the dough any further. At this point, the dough is overproofed and will fall flat if baked.

In this sense, dough can go ‘bad’ in terms of not being able to rise appropriately. It won’t develop enough bacteria to be unsafe to eat in such a short period of time unless it was already contaminated with something.

Standard dough that contains the traditional ingredients (flour, water, salt, yeast) is very long-lasting and doesn’t go bad easily. There’s nothing in the dough that can go rancid very fast, so it can have a relatively long life.

In my experience, dough that’s been forgotten about is best used for making tasty pizza – providing that it’s still okay to eat. It’s very easy and you don’t have to worry about much rise in the dough.

With that said, it’s still absolutely possible for dough to go bad and you need to make sure that you’re not using it if does become dangerous to eat.

Signs That Your Dough Has Gone Bad

When talking about dough that’s gone bad, we’re referring to something that is no longer safe to eat. It’s well past its shelf life and you can’t safely use it to make anything. It needs to go in the bin.

Here are some signs to look out for that can indicate that your dough has gone bad.

Go ahead and take a big sniff of your dough. How does it smell? If it smells rancid, that can be a good indicator that you’re going to want to get rid of it.

Yes, the dough can smell bad if it’s gone off, but it can also smell bad because of the fermentation process. Identifying the differences between a normal smell in dough and a bad smell generally just comes with experience.

If your dough smells like cheese or anything rancid, you’re going to want to get rid of it right away.

You never want to eat anything if it has signs of mold growth on it, so you don’t want to use dough with mold either.

Once the bacteria has developed upon the dough to the point where it is causing patches of mold, it’s extremely unsafe and will make you ill if you eat it.

Don’t think you can just cut it off and expect it to be completely fine as you’ll likely get ill.

Mold can make you very sick, so never risk eating something that has even the slightest amount on it.

How Long Does Dough Last?

The length of time dough lasts is hugely dependent on the ingredients that are in the dough and what environment it’s being kept in.

At the same time, dough with certain ingredients will have a much shorter life than standard dough. Very basic dough that just contains flour, water, salt, and yeast (and oil in some cases) will have the longest life of all dough as there are no ingredients that can go bad easily.

On the other hand, dough that contains dairy products like milk, yogurt, etc. won’t have a very long life as bacteria can develop much faster in these products.

Dough that’s kept at room temperature and contains milk will go bad fairly quickly as the bacteria will thrive, especially if it’s warm. Most bacteria will be killed off during baking, but there can still be some that remain if the dough has been allowed to gather bacteria for too long.

How To Make Dough Last Longer

If you’re consistently allowing your dough to sit around for a longer than normal, you might want to get a better understanding of what helps to extend its life so you can use it whenever you want.

Here are 3 tips for helping your dough last just that little bit longer.

Be fairly traditional in your recipes and stick to the flour, water, salt, yeast formula for dough that’s going to last the longest.

Adding butter or oil to the dough should be fine too. These ingredients aren’t likely to shorten your dough’s life too much.

You want to avoid ingredients that have a very short life like milk, yogurt, sourcream, etc. These ingredients will attract bacteria fairly quickly and make your dough go bad faster than normal.

Make Sure To Store It Right

Most dough is fine to eat even if it has been sitting around in your fridge for a few days more than you expected. In fact, the flavors of the dough may even be better at this point than they were previously.

However, if the dough hasn’t been stored appropriately or it has been left for slightly too long, it may have lost some of its qualities, but you can still use it in some applications.

The last thing you want to be doing is making yourself ill, so it’s important that you throw your dough out if there is any chance that it’s gone bad. Don’t risk anything.

Cut Back On The Yeast

If you’re planning on storing your dough in the fridge for a while, you’re going to want to significantly cut back on the amount of yeast you’re putting into it.

The more yeast you add, the faster it’s going to exhaust its resources, overproof, and collapse.

You can slow down the rate of the proof hugely by cutting back on the yeast. Add half, a quarter, or even less of what the recipe calls for and your dough will continue to rise for a much longer time and at a much slower rate.

If the dough ever looks like it’s near doubled in size, you’re going to want to gently punch it back down again so it doesn’t overproof.

What Can I Do With Old Dough?

There are two main things that I personally like to use my old and forgotten dough for. Since it’s likely heavily overproofed, you’re not going to be able to make risen bread with it, so there are some alternatives that you might want to look into before throwing it out.

Okay, so if you the dough was already pizza dough, it’s not a problem. You can still make tasty pizza but it will likely be flatter than a standard pizza.

You can make some kind of pizza from almost any dough since it’s not a difficult thing to do. The type of pizza you make is up to you.

Simply spread out the dough into your desired shape, add all the toppings you want, and pop it in the oven. You’ll have an easy and delicious pizza in no time.

Just be careful when handling the dough. Dough that’s been fermenting for a while can have a very weak structure that’s easily torn, so handle it gently.

It Can Be A Preferment

Assuming that your old dough is still in fairly decent condition, you can use it in your next dough recipe for added complexity.

When adding dough that’s already been fermented (a preferment), you’re adding a lot more flavors to the new dough. If your old dough still has some active yeast in it, it can also be used to help with the rise of the new dough.

Adding this old dough to any bread you’re making will make a huge difference to what would normally be standard bread. Once you try it, you’ll notice a great improvement in the flavor.

Of course, it’s not always as easy as throwing a random amount of the old dough in with the new dough. You should do some research into what kind of ratio to use and you’ll be making extra tasty bread in no time.